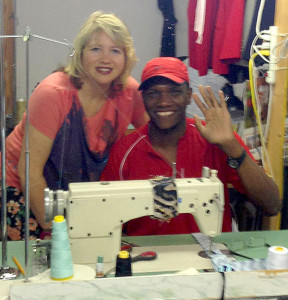 Fort Lauderdale – Imagine being hidden away and ignored by your parents because you have a disability. Now imagine that not only can you not hear what other people are saying, they are speaking a number of different languages and are having a difficult time communicating with you.

Well, that was what Pierre Garnaud (right with shop owner Karina Bramer), who is deaf, had to deal with as a child. But he didn’t hide away and give up. He taught himself how to sew and came up with a mixture of sign language and gestures to talk to others using a combination of French, Creole, and English.

Communicating with others has always been difficult for Pierre, who grew up in Haiti. He explains, “Sign language is not recognized by Haitians, but it is used in some elite schools. Haitians who are deaf may use some oral Creole, some oral French, some of their country of origin’s sign language – typically called ‘home sign,’ some signed English, some America Sign Language, gestures, or a combination of any of these or all of the above to communicate. Many individuals with disabilities are considered to have little value. People like me remain in the family home and are often hidden from everyone. Most Haitian parents struggle to meet the basic needs of their children. Having a child with a disability often requires more resources than families are able to provide.”

Pierre came to America seven years ago. He was determined to work, so he came to the local Vocational Rehabilitation (VR) office and met with VR Counselor Lucia Mavrakis. VR provided a number of services for Pierre, including hearing aids, eye glasses, interpreter services, clothing for his job interviews and a monthly bus card. Lucia also referred him to Job Coach Ana Davis with Jewish Community Services to help him get ready for work.

After working with Ana to learn how to get around using public transportation and to apply for different jobs, Pierre was excited to land a job at Alterations and Much More as a tailor. Owner Karina Bramer is very happy to have Pierre as part of her staff. “He is a very humble and lovely person,” she says. “His disability is not an issue at my work place, especially for Pierre! He takes two buses to come to work, and his dedication and skills are extraordinary.”

Pierre communicates with his co-workers by writing and, when needed, Jewish Community Services provides an interpreter for him. “Being in America and having a job as a tailor is what makes me happy,” Pierre says. “Having language difficulties and a disability will not stop me from obtaining my purpose in life.”

Lucia is very proud of how far Pierre has come since she first started working with him. “Helping Pierre was a challenge for us because of the language barriers. Ana and I worked closely with him to engage him and provide support and increase his independence and self-confidence. In getting the opportunity to work, he has become more independent. The best part about working with him was his passion for the job he is doing right now. He is a very honest and sensitive individual that confronted adversity and adjusted to a different life in a new country.”

Ana agrees, “Pierre is an extraordinary individual who not only faced the disadvantages of language as an immigrant, but also overcame many complications because there is no uniformity of home language among Haitian deaf individuals. Being an individual and living within a different linguistic and cultural group, he has survived and learned to articulate his own values, social norms, and traditions.”