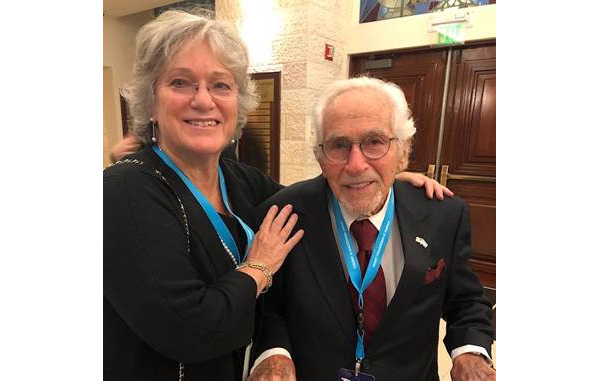 I am very sorry to inform you of the passing of Israel Joe Sachs, 94, beloved father of our friend and Board Member Dr. Helen Chaset. Joe was a Holocaust Survivor, whose family was the center of his life. Joe is survived by his two children, Helen Sachs Chaset (Alan) of Aventura and Jake Sachs (Leslie), a commissioner in New Smyrna Beach, FL., his loving granddaughter Jesse Cukierkorn (Celso Cukierkorn) and great-granddaughter Sophie Cukierkorn. Joe was predeceased by his late wife Marcia Sachs, who was also a Holocaust Survivor.

Joe was born and raised in the small town of Przyrow, Poland. During the Nazi occupation, he was taken to a labor camp in Germany when he was 15. Although he was liberated in 1945 after nearly three years of concentration camp internment, sadly none of his family survived the war.

Joe has written a memoir called “Legacy of Life” and is a co-founder of the group, Miami-Dade Holocaust Survivors and Descendants. He and his group of survivor leaders were tireless and passionate advocates for the rights and benefits of all the survivors, at the local, state, and national level.

Joe was a main contributor of the Miami-Dade Holocaust Survivors Group that identified the importance that each South Florida County (Palm Beach, Broward, and Miami-Dade County) become separate recipients of the Claims Conference funding. This change was invaluable for the survivors of Miami-Dade County to receive adequate funding. Joe was a Member of the Masada Homecare Board for many years. In addition, Joe was a member of JCS Holocaust Advisory Committee who reviewed emergency financial assistance requests for JCS Holocaust Survivor clients and he assisted with implementation and continuation of Café Europe socialization programming.

Joe will be sorely missed by all who had the privilege of knowing him. May the family be comforted among the mourners of Zion and Jerusalem and may the memory of Israel Joe Sachs forever be a blessing. Details of the Memorial Service to follow.